The Bachelorette Is Taking Woman vs. Woman Drama to New Extremes. It Sucks. – CNET From spiteful drama to hypersexualisation of contestants, The Bachelorette hardly stands as a shining beacon of feminist ideals. However, the show has been something of a trailblazer, showcasing a sole lead woman freely dating dozens of men until she finds “the one.” It’s been that way for 18 seasons.

This season, The Bachelorette centers on the all too familiar trope of woman versus woman.

In March, ABC announced that for the first time in the show’s history, there would be two female leads: pilot Rachel Recchia and ICU nurse Gabby Windey. Both successful, smart and beautiful women who may not have won season 26 Bachelor Clayton Echard’s heart but the hearts of viewers by supporting one another through heartbreak.

Five weeks ago, 32 men entered The Bachelor mansion in the hopes of finding love with Gabby…or Rachel…or both?

To be honest, I’m not sure and the women don’t seem sure either.

Up until the end of the third episode, there was no clear cut way of deciphering which man was there for which bachelorette. Gabby and Rachel’s plan: If a man accepts a rose from Gabby, then he is only dating Gabby and vice versa. In theory, this plan would be a way to spare each other’s feelings while taking more control over their own fates as bachelorettes. In practice, the historic rose ceremony only granted more power to the men. That power dynamic reversal is the fatal flaw in this experimental season: the men have as much control over the roses as the women.

Sexist vibes seem to be the theme of most reality dating shows; take the popular UK dating show Love Island. A show in which couples are paired up and recoupled every week, Love Island is packed with salacious drama that makes for great reality television but also probably sets women back about 50 years.

While the format intends to give all contestants an equal opportunity to find love, female contestants are subjected to a type of emotional manipulation and judgment that occurs all too often in the real-world dating sphere. Male counterparts tend to gaslight and question their partner’s sanity when being asked about their intentions behind talking to another girl. However, when women play the game and talk to other men in the villa, they face backlash not just from partners but from every other contestant. Other women vilify them for breaking girl code and men label them untrustworthy. Sound familiar?

Reinforcing the stereotype of women as hyper-emotional boy-crazed individuals has dangerous repercussions far beyond the walls of the Love Island villa. Studies show consistent prolonged exposure to negative stereotypes in the media leads viewers to adapt those beliefs, allowing stereotypes to become further ingrained in our culture. While no one could accuse Love Island of being the root of all misogyny, it’s yet another piece of a much larger problem.

This may be the first time a season has had two leads, but it isn’t the first time ABC played around with The Bachelorette format. In 2015, Kaitlyn Bristowe and Britt Nilsson, both women from season 19 of The Bachelor, were brought to the mansion on the first night. Following each man’s limo entrance, contestants had the opportunity to speak briefly with both women, but ultimately had the power to choose at the end of the evening which woman was to remain the lead for the remainder of the season. Bristowe won the vote, not only allowing her the opportunity to find love, but the platform that would eventually lead her to a successful career as a social media influencer.

This time around, Bachelor Nation fans on Twitter and Facebook speculate the change of format comes due to a dramatic drop in ratings in The Bachelor franchise. Clayton Echard’s season finale of The Bachelor made franchise history as the lowest of all time with 4.7 million viewers, according to Variety. Regardless of the low ratings, The Bachelor franchise still ranks as a top series for ABC.

So far this season, the drama surrounds rejection, or the fear of being rejected, rather than the opportunity to explore connections. Instead of wondering who the lead will choose, most headlines wonder if Gabby or Rachel will cross paths in their preferences or which woman each man will choose. While there is such a thing as a two way street when it comes to love, this season seems to be a way for men to double their chances of screen time.

This manipulative and ego-bruising form of competition is something the male leads of The Bachelor have yet to experience. This presents the underlying question: Why does ABC solely experiment with The Bachelorette?

ABC didn’t respond to a request for comment as to whether it plans to replicate the format with double Bachelors.

I’ll be the first to admit that I love all forms of catty reality television drama and I’m secretly waiting for the moment Gabby and Rachel develop feelings for the same man. But that’s the issue! Countless Bachelorette commercials, interviews and social media posts are not-so-subtly encouraging viewers to choose one woman over the other. By labeling the men on the show as “Team Gabby” or “Team Rachel,” production, intentionally or not, is coaxing viewers into rooting for one over the other. Gabby and Rachel’s friendship aside, having two bachelorettes this season continues to perpetuate the played out narrative of pitting women against each other for a man.

Even former bachelorette Andi Dorfman expressed her dismay about production’s decision in a June interview with Entertainment Tonight.

“I want to be supportive because it’s a franchise that literally put me here right now… but I’d be lying if I said I wasn’t bummed that it’s two women,” Dorfman told ET. “I’d like to see two men go at it. I don’t know. It gives me a little sexist vibe there that I don’t really love.”

One of the most disheartening aspects of reality dating shows such as Love Island and this season of The Bachelorette is that, despite the dramatization of it all, the shows reflect real life. Rather than being seen as human beings, women are, and have always been, seen as objects of desire for which men must compete to win.

Although a show that adheres to strict feminists ideals would be painfully boring (besides, what’s a reality show without a hint of spiteful drama and tumultuous relationships), I still hope that both Gabby and Rachel find true, genuine love while maintaining their strong friendship. Maybe one day we can live in a world where women aren’t pitted against each other for the sake of television ratings. 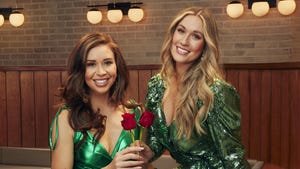