Originally created in 1964 by Bruce Meyers, the Volkswagen-based Meyers Manx dune buggy is one of the most iconic vehicles to grace this earth. Over the years there have been many official iterations from the Meyers Manx company, which produced the buggy until 1971 and was refounded in 2000, as well as countless copycats and kit cars. In 2020 the brand was purchased by venture capitalist Phillip Sarofim, and the revamped company on Monday unveiled its first brand-new creation: The Meyers Manx 2.0 Electric.

The Manx 2.0 is the first truly new vehicle from Meyers Manx in nearly 60 years, and as you can probably tell from the name it’s fully electric. Crucially the new buggy is obviously still a Manx, but it has some rad styling updates courtesy of Freeman Thomas, who designed cars like the original Audi TT, Panoz Roadster and Volkswagen New Beetle. There’s a new intake at the front end that apes the shape of the brush guard, and the body’s fender flares have been subtly resculpted. The Manx’s lower tub shape hides the battery and other new components really well. The biggest changes are at the rear, with the Manx 2.0 getting new oval LED taillights and a solid bumper instead of the normal Manx’s exposed engine. There’s a rad new hardtop, and the interior has a simple dashboard with a large retro-style round speedometer and cool lighting.

Every version of the Manx 2.0 uses a pair of electric motors mounted at the rear, with each one powering one of the rear wheels, and the brakes, gear train, inverter and motor are all housed in a single unit. The buggy has independent rear suspension, disc brakes at all four corners with regenerative braking for the rear brakes, electric power steering and an electric emergency brake. A 20-kilowatt-hour battery pack providing a range of 150 miles is the base setup, while the optional 40-kWh battery offers a range of 300 miles. Meyers Manx hasn’t given performance specs for the base model, but the 40-kWh Manx has 202 horsepower and 240 pound-feet of torque and will hit 60 mph in about 4.5 seconds. DC fast charging of up to 60-kW will be optional, and the Manx comes standard with a 6-kW onboard charger.

Meyers Manx says the first 50 units of the Manx 2.0 will be delivered to customers in 2023 as part of the Meyers Manx Beta program, with owners helping give feedback on the cars to the development team. Full production will commence in 2024, with the company partnering with an unknown American manufacturer to produce the Manx 2.0 in California. Pricing has yet to be announced, but interested customers can apply for preorders after the car makes its full debut on Aug. 19 during Monterey Car Week. Oh, and in case you’re nervous about a storied brand like this being snapped up and overhauled by an entrepreneur, don’t be. Sarofim has one of the raddest car collections out there, including the Lancia Stratos Zero, the Isdera Commendatore 112i and the recently restored Aston Martin Bulldog. 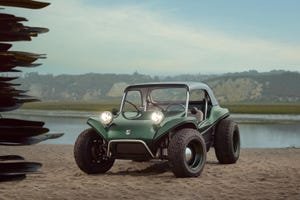