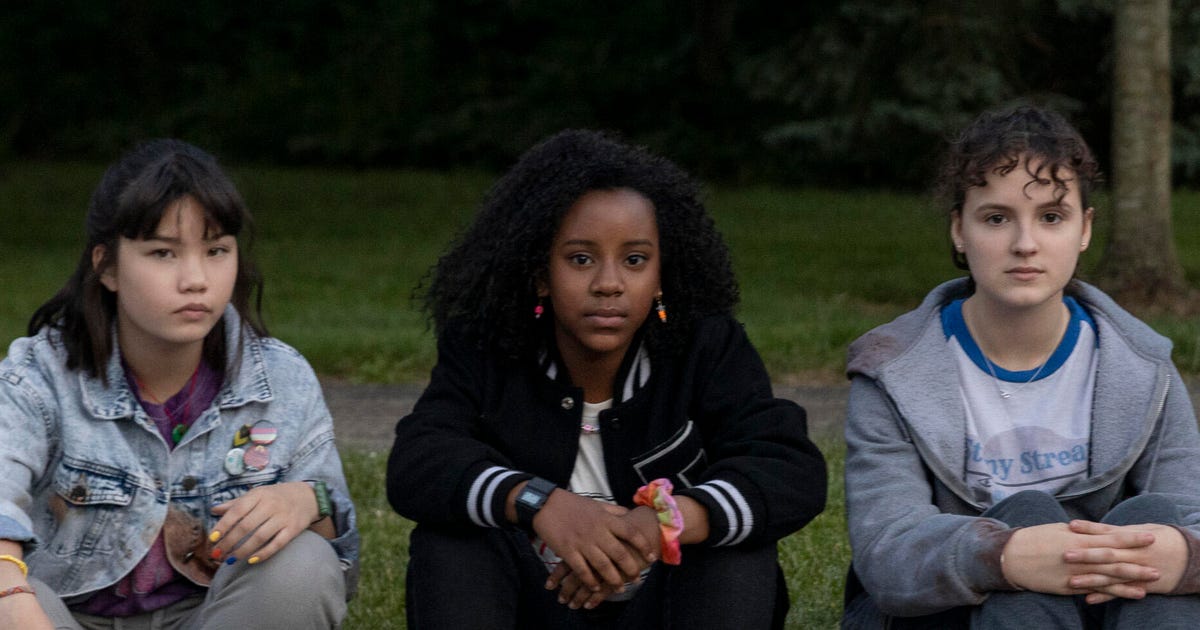 Yes, I know. Sounds a lot like Stranger Things. But let’s try to forget about Netflix’s smash hit for a minute and give Amazon’s entertaining new sci-fi show Paper Girls a chance.

Paper Girls is based on the award-winning comic by writer Brian K. Vaughan and artist Cliff Chiang, which began in 2015 and ran for 30 issues. All eight episodes of the first season began streaming on Prime Video in July.

The show begins in the wee small hours as Halloween 1988 draws to a close. Four 12-year-old paper delivery girls take to the darkened suburban streets to begin their round. Tough-talking Mac, shy new kid Erin, rich kid KJ and budding prodigy Tiffany have to contend with racists, bullies and drunks, but these everyday assholes pale into insignificance when the girls are caught up in a war between time travelers.

The first episode is thrillingly chaotic, with the sodium-yellow streetlights giving way to a roiling pink sky as the kids find themselves caught up in craziness and confusion. Their paper round spirals into escalating weirdness and action, with some genuine shocks building to a solid cliffhanger. It’s all there: four engaging leads, an intriguing premise and some deliciously odd twists and turns.

The main strength of the show is the young cast as they’re catapulted forward 30 years and are thrown around in time, facing themselves and their loved ones in years to come. Riley Lai Nelet and Fina Strazza are relatable as the unassuming underdog and sensitive scion of a wealthy family, while Camryn Jones shines later in the show as the team’s sparky thinker. The standout throughout is Sofia Rosinsky, channeling Edward Furlong’s rebellious juvenile delinquent from Terminator 2 with a combination of bravado and vulnerability.

The Terminator is probably the other big influence on the series, as a ruthless hunter infiltrates the suburbs to track down our time-displaced young heroines. As with all time travel stories, paradoxes and timelines soon get tangled, with the young newsies encountering their future selves (including comedian Ali Wong).

This is the key thing about Paper Girls: it’s a coming-of-age story, using the sci-fi conceit of time travel to allow characters to see how they turned out and demand answers from the people they come to be. The older versions of the girls have as much to learn from their younger selves as the youngsters do from any adult, and it’s a compelling way to explore these questions of what it means to grow up and take control of your life.

Or at least, the show comes pretty close. Later in the series one of the young cast meets their older self in an encounter that’s bribing with conflict and revelation. But Wong is under-served in her appearance as an adult who just turns out to be a bit mediocre. A slightly disappointing life isn’t really the stuff of drama, especially in a show when the other storyline is a frickin’ guerrilla war between sci-fi commandos and laser-gun-toting fanatics jumping through time.

Paper Girls has enough twists and compelling characters to keep you involved, but the show does lose momentum after the eventful first episode. All too often the girls arrive in a new location and then just… go to bed. People need to sleep, sure, but scenes like this feel like intermissions when the momentum flags, even sapping the tension out of the pursuing hunter’s approach. Paper Girls could do with more urgency and energy as the heroes fight both their enemies and their desire to get back to their home time (or not).

A lack of momentum isn’t a problem that troubles Stranger Things, and Paper Girls will suffer by comparison with Netflix’s hit show. But it’s worth noting that Paper Girls is a different animal. Stranger Things is set in the 1980s because it’s all about the ’80s: the hair, the music, the clothes, Dungeons & Dragons — the pop culture references are the point, as this retro nostalgia is a loving tribute to (and updating of) the movies and culture of that era. Paper Girls, however, starts in the 1980s so the kids can hop forward through their lives. There are some excellent vintage needledrops (if only it would do for New Order, Danzing or Echo and the Bunnymen what Stranger Things season 4 did for Kate Bush), but this isn’t a show about the ’80s specifically: it’s a story about growing up told across the timeline of a life.

Paper Girls could do with a jolt of the energy that makes Stranger Things fizz. But set aside any comparisons and there’s a lot to like about this twisty show, especially its winning young cast.

iPhone 14 Plus Review: For People Who Love Big Screens – CNET

‘Andor’ Episode 5 Recap: The Rebels’ Plan Comes Together, With Some Dangerous Tension – CNET

iPhone 14 Plus Review: For People Who Love Big Screens – CNET