Greninja Seven-Star Raid Guide: Which Pokemon to Use – CNET 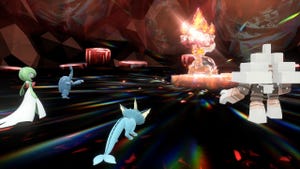 The next seven-star raid is coming to Pokemon Scarlet and Violet this Friday, Jan. 27, featuring a poison-type Greninja. The first round runs through Monday, Jan. 30, and the second round picks up about two weeks later, from Friday, Feb. 10, to Monday, Feb. 13. Like the other seven-star raid Pokemon, Greninja will have the mightiest mark, and you’ll be able to catch only one per save file. Based on the previous seven-star raids, the Pokemon will take some careful strategizing to beat.

We don’t know the full details of the Greninja raid just yet, but we can make some assumptions based on previous seven-star raids. First, it’s a pretty safe bet that Greninja will have its hidden ability, Protean, since Charizard and Cinderace both came with their hidden abilities. Fortunately, that won’t affect the raid itself, as terastallization negates the effects of the protean ability. We can just plan around the tera type.

Greninja is confirmed to have a poison tera type for the raid, which lets us speculate about likely movesets. Assuming it uses moves that match its natural typing and tera type, we predict a moveset along these lines, assuming it’s a physical attacker:

Remember that seven-star raid Pokemon can use more than four moves — Cinderace, for example, used four attacks and Bulk Up, even though the latter wasn’t in its moveset once caught. Swords Dance would make Geninja a terrifying threat in a physical attack build, whereas Rain Dance would make its water-type attacks extra threatening, similar to the seven-star Charizard raid with Sunny Day.

We won’t know the perfect Pokemon or builds to bring to the raid until the full details are live, but here are the Pokemon that appear to be well-positioned for the raid. To give yourself the best chance at victory, make sure your Pokemon is level 100 and has a nature that boosts its relevant attack stat (usually Modest for special attackers and Adamant for physical attackers).

The water-type Eeveelution is an early favorite for this raid, thanks to a variety of advantages it has, especially if Greninja uses a special attack build. Vaporeon’s normal ability is Water Absorb, which allows it to regain health if hit by a water-type attack. This turns one of Greninja’s scariest setups (rain-boosted water attacks) into a benefit. These seven-star raids are wars of attrition, and having reliable ways to restore health are important. Vaporeon also has access to Calm Mind, which boosts its special defense and special attack, as well as Stored Power, a psychic-type attack that will hit the poison-type Greninja for double damage and that deals additional damage based on your boosted stats (on top of the special attack boost it gets from Calm Mind). With Vaporeon’s decently high special attack stat and immunity to water attacks on top of massive HP, stacking Calm Minds into Stored Power should be a reliable way to work down the raid boss’s health. The biggest danger with Vaporeon is that it doesn’t naturally resist poison, and a Greninja with Gunk Shot could threaten Vaporeon’s underwhelming defense stat. However, a steel tera type would help overcome that problem.

This Pokemon benefits from its steel/fairy typing, which gives it resistance to dark-type attacks and full immunity from Greninja’s tera-boosted poison attacks. Klefki also has access to the same “stack Calm Mind into Stored Power” combo that Vaporeon has, though it won’t be able to hit quite as hard as Vaporeon. Still, a natural immunity to poison may be worth that trade-off, especially if Greninja ends up running Gunk Shot. Sunny Day combined with Klefki’s Prankster ability makes it particularly effective at guarding against Greninja setting up in the rain. The biggest drawback for Klefki is its lack of access to a reliable recovery move, as Draining Kiss will do minimal damage to the poison-type Greninja. Klefki also boasts a relatively high defense stat, which it can boost with Iron Defense (also supporting Stored Power), making it a better choice if Greninja is built with physical attacks.

Bronzong operates similarly to Klefki: immunity to poison damage, good natural defenses, and Calm Mind + Stored Power combo. The biggest difference is that Bronzong is weak to Greninja’s natural dark type, which could make Bronzong a less reliable pick if Greninja runs Night Slash or Dark Pulse. However, it gains a same-type attack bonus, or STAB, for pyschic-type moves, allowing it to hit harder than Klefki would.

A slightly less obvious pick to counter Greninja, Kingambit is another steel type that benefits from poison immunity. A strong physical attacker, Kingambit can run Swords Dance to boost its attack and unleash supereffective Zen Headbutts on the poison-type Greninja. The downside is that Kingambit will be slightly worse if Greninja runs Rain Dance and special attack water moves, which hit Kingambit for neutral damage. However, Kingambit can run Sandstorm to negate Rain Dance and somewhat offset that risk. It’s worth noting that Zen Headbutt has only 90% accuracy, which makes this strategy higher-risk than bringing Vaporeon or Klefki. The lack of recovery moves for Kingambit means you’re virtually required to run Shell Bell as your held item to help you sustain through the raid.

An unlikely hero for the raid, Clodsire will be virtually impossible for a special attack Greninja to take out. The Water Absorb ability allows Clodsire to turn a traditional weakness (water-type attacks) into HP recovery, and its natural typing means it takes only 25% damage from poison-type attacks. Clodsire is a little worse if Greninja runs an ice-type attack, but otherwise it’s a powerful special tank with enormous HP, strong special defense, and access to recover as an egg move. Clodsire can’t boost its own attack like the other Greninja counters, but it does learn Helping Hand by TM, allowing it to boost teammates’ attacks. (Helping Hand can make a properly stacked Stored Power deal massive damage.) Earthquake is your main damage move, though you could run Bulldoze instead for speed control at the cost of less damage. Bringing Clodsire to the raid means you won’t be doing the most damage in the party, but you’ll stick around forever and prevent your team from losing time due to being knocked out.

You can always choose to run more of a supportive build instead of offensive builds, as many of the counters listed here have solid defensive stats. However, when you bring a support Pokemon to a seven-star raid, you’re relying on your other three teammates to do a ton of damage, which can be a gamble with random teammates. In premade groups, two or three sweepers and one or two support Pokemon will be the most consistent composition. But after losing plenty of Cinderace raids to a lack of damage, I recommend offensive builds if you’re relying on unknown teammates.

If you have the benefit of planning around other teammates, I’ve included two support builds here. Remember that the clock is your real enemy in seven-star raids: The only way to win is to efficiently take out your opponent’s HP. Big bursts are the most effective way of doing that, which is why we recommend stacking Calm Mind into Stored Power as the most reliable way to fight Greninja. But staying alive is also important, as getting knocked out by Greninja will instantly remove a section of the remaining raid timer, which puts a bigger squeeze on a limited resource. Pay attention to how much damage you’re taking from each attack, and use your recovery moves and your cheers to keep your Pokemon healthy enough to survive the next attack. 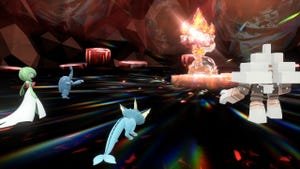