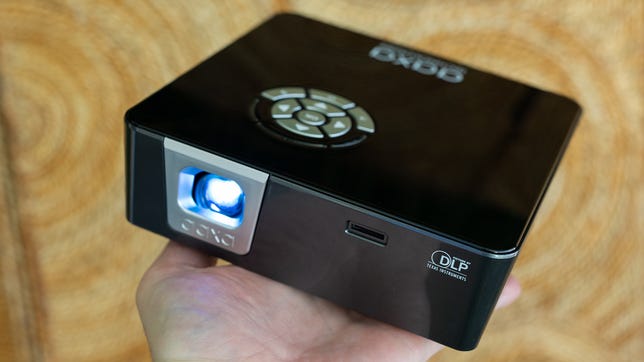 Having a small portable projector means you no longer need bulky gear or a big budget for a big screen. The best portable projectors allow you to spend movie night inside a pillow fort, in the backyard or even out in the wilderness. These options can fit easily in any backpack, and some are small enough to fit in your pocket.

Whether you project onto a blank wall or a projector screen, you can capture the picture quality you crave without getting weighed down. They also offer a handful of connectivity options including HDMI and Bluetooth, and they typically run on batteries. Many mini projectors are set up to stream, giving you access to Netflix, Amazon Prime Video, Disney Plus, Hulu and other streaming services without having to connect another device.

Portable projectors do come with a few drawbacks, though. One is that many are relatively dim, lacking the brightness of a traditional home theater projector, meaning they can’t project as large an image as the big guys. Another is that even the best portable projectors often have lower resolution than their larger counterparts. If you’re never going to be far from an outlet, a standard projector will get you a much bigger, brighter and better image for similar money. But if you want something compact, portable and maybe battery-powered, here are our top picks for the best portable projector.

The Mars II Pro is the best compact projector option here due to its light output, overall image quality, ease of use and affordable price. This mobile device is a bit bigger than most other portable projectors here, but still small enough to hide completely under a six-pack of Coke.

The built-in 12,500-mAh battery is good for about 3.5 hours, longer if you just run it as a Bluetooth speaker. There are apps built in, some of which consider the Mars II a portable device, meaning you can download content to its 8GB internal memory for offline watching. The faux-leather strap also makes carrying the outdoor projector around super easy.

I like the top projector better but the AAXA P6X is my pick when money is tight. Not only less expensive than the Anker above, it’s also brighter with superior battery life. This mini projector fits in my hand, creates a 720-pixel image, and has a huge 15,000-mAh battery. An HDMI input and USB connection lets you connect and power a streaming stick. The stick connection is important because the AAXA lacks built-in apps.

Light output is impressive for its size and price, about 50% more than the Anker Mars II Pro, though its contrast ratio is a bit less. The internal battery should last around 90 minutes in the mini projector’s brightest mode, and an impressive 240 minutes in Eco mode — probably a little less if you’re also powering a streaming stick. The internal speaker isn’t great, but there’s a headphone jack you can connect to a portable speaker.

Although it costs more than the Anker Mars II Pro, this BenQ has more accurate color and a better picture overall. With 1080p resolution, compared to the Anker’s 720p, you’re less likely to see pixel structure or a “screen door effect” when watching from close up or with a really big image screen size. In most cases, however, 720p is just fine, making the Anker a superior value.

The Anker Nebula Capsule is smaller than a can of soda, but can create a big image. Well, maybe not “big,” but “TV-sized” certainly. It’s not particularly bright, nor loud, but for something that can fit in your pocket it’s great. The other options here offer a far brighter, better image, but if size is your main concern, the Capsule looks better than you’d expect for its price and stature.

Unlike the other projectors on this list the AAXA P8 can’t run on a battery — you need to plug in its power adapter — but it’s so small, bright and cheap it makes the list anyway. There are certainly less expensive projectors out there, but nothing we’ve seen at this price or lower is worth recommending.

The P8 is absolutely tiny, roughly the same overall volume as the Anker Capsule, though obviously rectangular instead of cylindrical. It’s significantly brighter than the Capsule, and slightly cheaper. It even has a few streaming apps built in, plus an HDMI port for connecting an external source. The image quality is OK, but for the size, price and relatively high light output, it’s hard to knock it.

While we didn’t like it quite as much as the BenQ GS50, this small, flat Anker mini portable projector costs less. Its main disadvantage compared to others on this list is its relatively dim image, which means it can’t project as large a picture and still look good. If you want a sleek, budget-friendly portable with 1080p and plan on keeping the image on the small side, however, this is a solid choice.

LG CineBeam PH30N: The LG PH30N is tiny even compared to other portable projectors, even smaller than the AAXA. It’s not particularly bright, however, nor does it have built-in apps. The battery doesn’t last as long as the AAXA either although it is a bit cheaper. Read our LG CineBeam PH30N review.

Samsung Freestyle: The small, cylindrical Freestyle is an interesting idea, but it comes up short. About the size of a Bluetooth speaker, and in fact can double as one, the Freestyle can pivot on its stand to project an image at any height on walls and even the ceiling. Its built-in streaming is far better implemented than most portable projectors. However, it lacks a battery and its performance is average, at best. Worse, its price is a good 50% higher than it should be based on how it looks and performs. Read our Samsung Freestyle review.

Xiaomi Mi Smart Projector 2: Another relatively expensive projector we didn’t love, the Xiaomi at least has a gorgeous, Apple-like design going for it. We appreciated the compact size, 1080p resolution and built-in Android TV streaming, but the cons outweigh the pros. It’s relatively dim, especially for the price, and it lacks both a built-in battery and compatibility with a USB power source, so it’s not truly portable. Read our Xiaomi Mi Smart Projector 2 review.

BenQ HT2050A: The HT2050 isn’t technically a portable projector, but it is compact and roughly the same price as one of the more expensive “portable” options. Its picture is also much better in pretty much every way, so if you’re looking for a projector for use around the home, or maybe backyard, and you don’t need battery power, it’s worth considering. Read our BenQ HT2050A review.

How we test portable projectors

Every projector we review goes through elaborate objective and subjective testing. CNET editors pick the products and services we write about based on editorial merit. When you buy through our links, we may get a commission.

What makes a mini projector different from a full-size projector?

A bright projector can produce a larger image, and looks better when there’s some ambient light around. For that reason dimmer portable projectors are best enjoyed with smaller images and in as dark an environment as possible.

Beyond brightness, mini projectors are much smaller (of course), can run on battery power and usually include built-in streaming and decent speakers. Traditional projectors have more lens adjustments, including focus, zoom and lens shift, and can run louder.

Does a mini projector have to be plugged in?

It depends. Many portable projectors have built-in batteries that can run for two or three hours before needing to be plugged in. Some can also attach to external USB battery packs that allow them to be run without plug-in power. On the other hand, many smaller portable projectors, especially cheaper ones, don’t include a built-in battery or work with battery packs. They will need to be plugged in to work.

Can you watch Netflix on a portable projector?

Now playing: Watch this: How to buy the best home theater projector 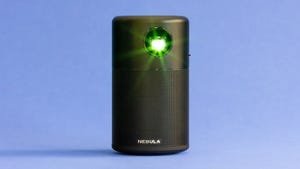 Rocksmith+ makes learning guitar fun for a newb like me

Responsible AI is a top management concern, so why aren’t organizations deploying it?