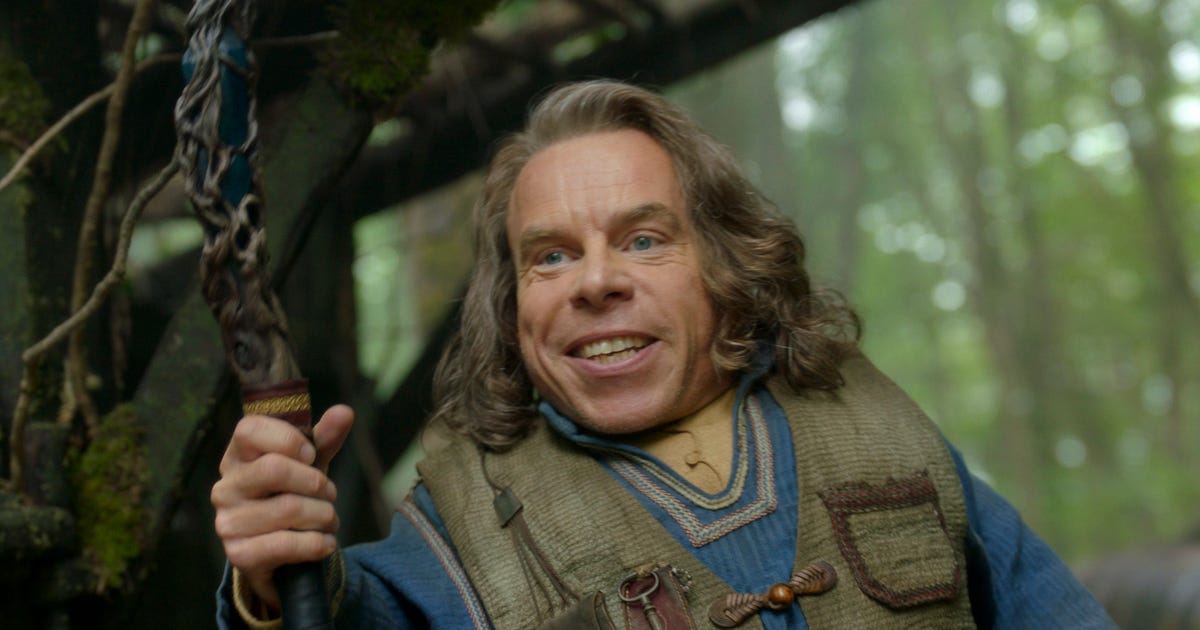 If Lord of the Rings and Game of Thrones take themselves too seriously, Willow is back to put some fun into fantasy. This new Disney Plus series is a long-awaited sequel to the 1980s sword ‘n’ sorcery romp, and it’s a welcome blend of clanging swords and comedy (with some spooky bits to make the kids jump).

Written by George Lucas, the original 1986 film starred Warwick Davis as short-statured but big-hearted farmer battling a cackling sorceress for the soul of a baby destined to save the world. Val Kilmer came along for the ride as cocky swordsman Madmartigan in a film that injected a healthy dose of humor into its fantasy world.

Kilmer is sadly absent from the new series due to the actor’s recent illness, but Joanne Whalley returns as the first film’s heroine, Sorsha. She rules over a time of apparent peace and prosperity, although her children with the missing Madmartigan aren’t so easily commanded. The baby from the film has been hidden away thanks to Willow having a vision, which seems like a pretty big thing to yada yada past in a voiceover, but then we’re straight into a hilltop sword fight and racing off into a whole new adventure with a cast of sharp-cheekboned teens.

The 2022 series, streaming now on Disney Plus, stars a feisty new princess who’d rather practice swordplay than accept an arranged marriage, her twin brother the cocky lady’s man, and various underlings in varying levels of love with them. Everything kicks off the night before the wedding as an evil force launches a surprise attack, and before you can say “J.R.R. Tolkien,” a fellowship of bickering royals, gruff old fellas and bantering warriors set out on a quest across picturesque scenery. Hurrah!

It isn’t entirely clear why the heirs to not one but two royal families are dispatched into danger, but what the heck. Things rollick along with rousing action, scary baddies and an inexplicable mixture of accents saying funny fantasy names. But what’s most charming is the show’s sense of fun. This seven-episode series includes plenty of genuinely funny bits, including a scene-stealing Amar Chadha-Patel as a new chatty warrior and a knowing turn from Warwick Davis drawing as much on his recent comedy work with Ricky Gervais as on the original film.

It’s very hard to avoid comparison in a post-Game of Thrones era that’s saturated with fantasy TV. Up in the premier league are the classy, grownup and clearly expensive Thrones spinoff House of the Dragon and Amazon’s Rings of Power. Some recent shows have a strong hook, like The Witcher’s sexy monster hunting, Shadow and Bone’s military magic or Carnival Row’s steampunk. Willow’s world of magical lore is less distinct, which veers dangerously close to flat-pack fantasy like The Wheel of Time. That means Willow relies almost entirely on name recognition nostalgia to hook you in. But once the title gets you through the door, the series is worth sticking with. The cast and characters are engaging, and it comes with a winning blend of action, humor and spookiness.

Speaking of which, the baddies are suitably evil, with scary magic and even scarier makeup. There’s a big fight in the opening episode that’s a bit gory and intense (and someone says “shit” for absolutely no reason at all), but then no ’80s kids adventure was complete without a bizarrely terrifying bit that scarred a generation, so we’ll allow it. And the deliciously creepy stuff is also leavened with playful touches like irreverent music cues and knowing ’80s cameos.

Whether Willow was a memorable part of your childhood or you’re coming to it for the first time — perhaps with your own children — the film and its world have aged surprisingly well. Maybe not the hokey special effects, which look like the advances of Star Wars never happened — and let’s face it, the first film was basically Star Wars in Lord of the Rings cosplay. You can see why George Lucas’ story of a farmer, a mercenary and his hairy chum, a princess and a wizard battling an evil emperor and a masked general would be seen as Lucas ripping off his own creation (even if Star Wars was a space-based remix of classic Japanese samurai movie The Hidden Fortress). It’s only with time that the gloss of nostalgia has worn away the Star Wars association.

But the film mostly holds up because of its positive vibe. Released in the macho Reagan-era 1980s and in theaters at the same time as Rambo 3, Willow featured a villain and magic mentor who were both women. The story hinged on a valiant midwife, and a mother-daughter love/hate relationship was one of the main storylines. Unlike Star Wars and most stories about a chosen one, the prophesied child was a young girl. And among the menfolk, Willow was a devoted family man called to be a hero not because of his fighting skills, but because of his nurturing parental instinct and hands-on experience of caring for a baby. Even Kilmer’s Madmartigan, the cocky swordsman, was far from the ultra-macho man’s man Kilmer played shortly before in Top Gun. Kilmer gleefully embraced looking silly (spending a chunk of the film in a dress), and his character grew as he was exposed to Willow’s caring nature.

Happily, this feminine energy and general sense of fun easily translates to today. Whether you’re a fan of the ’80s movie or not, the new Willow is a slick and entertaining blend of swordplay and wordplay that conjures up some of the old magic.