Apple’s 5K monitor, the Apple Studio Display, debuted in March last year. It’s currently the most budget-friendly external display in Apple’s lineup, and while Apple rarely discounts its own products, there have been a few deals on this display at some third-party retailers.

Right now Amazon has discounted the standard glass version of the Apple Studio Display by $199, bringing the cost to just $1,400 — its lowest price ever. The nano-texture glass version is also currently discounted by $150, meaning you’ll pay just $1,749 for a limited time. Both discounted displays are the models with the tilt-adjustable stand.

Each of these monitors feature a 27-inch 5K Retina screen, an A13 chip, a 12-megapixel ultrawide camera with Center Stage and a high-fidelity, six-speaker sound system. Their three-mic array makes for clear audio on calls and voice recordings. More than 14 million pixels and 1 billion colors at 600 nits of brightness make for a phenomenal display. And an antireflective coating also ensures better readability, while the nano-texture glass option further minimizes glare.

They each have one Thunderbolt 3 (USB-C) port with 96-watt charging capability to connect your Mac, and three standard USB-C ports. Plus, you can pair your Studio Display with Mac notebooks and desktops, as well as Magic accessories (sold separately).

It’s important to note that this monitor doesn’t play nice with Windows computers — but if you’re already an avid Mac user, these deals at Amazon can help you score a solid monitor for less than you’d pay at the Apple Store. 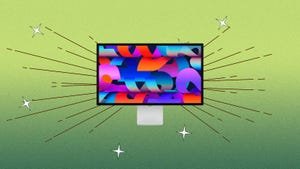